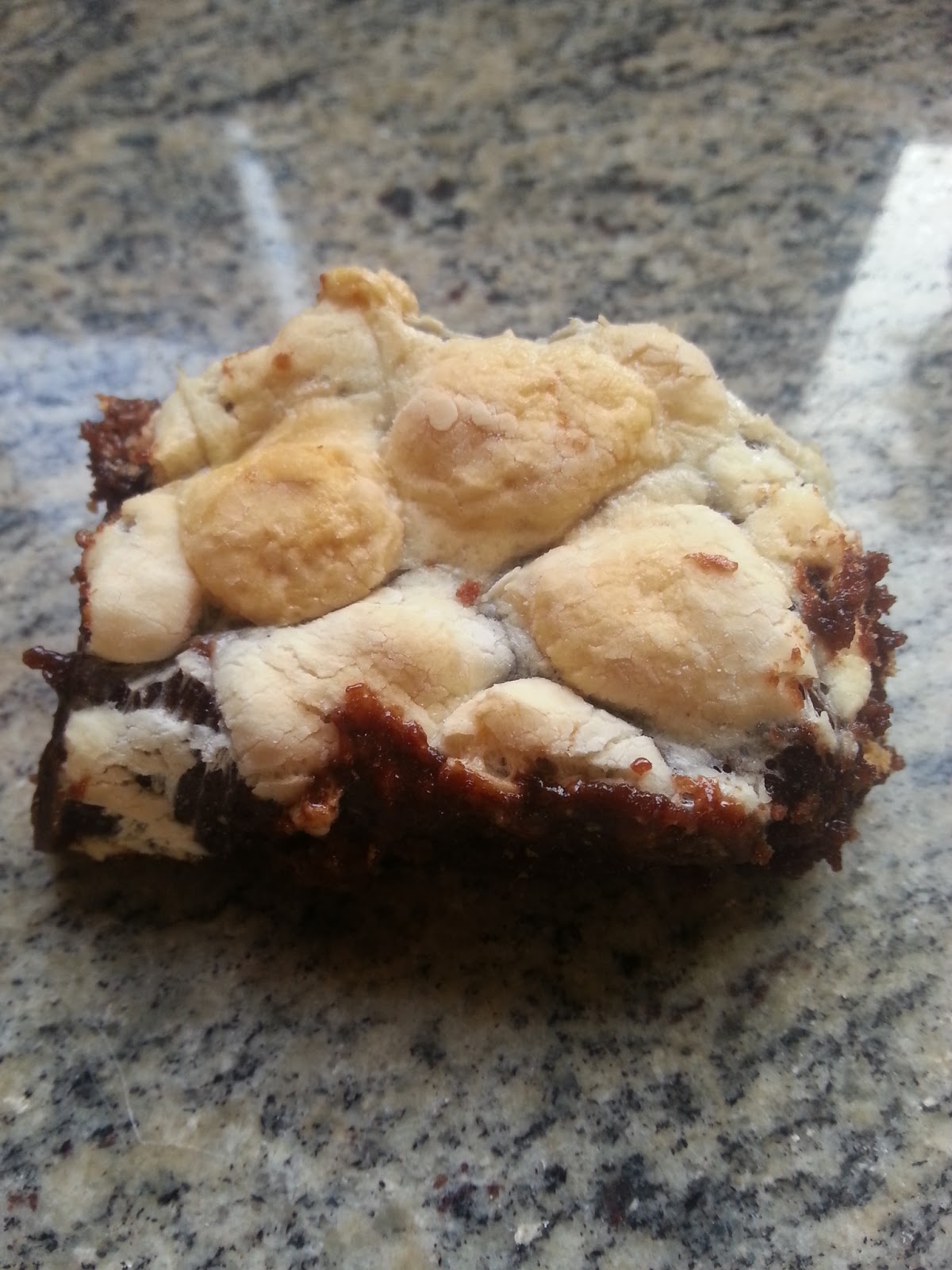 The weather is getting warmer, which means lots of cook-outs and outdoor get-togethers, and more importantly, delicious, delicious s'mores. I love s'mores, but I think we can all agree they can get more than a little messy. I decided I wanted to bring something to a girls' night (Magic Mike Night ;)) and thought maybe S'more Brownies would be something cool to try.

I did some research online and found quite a few recipes for them, but they all had graham cracker crusts and frankly,

Instead, I decided to mix the graham crackers into the brownie mix. And, in case you were wondering, graham cracker crushing is a seriously awesome way to relieve some stress.

While making these, I was in the middle of doing half a billion other things at the same time, so when I took these out of the oven I just assumed they were cooked and didn't test them as I should have. Turns out that was NOT a good idea. I didn't get back to them until they had cooled and it was time to cook them...and what a mess. BUT the good news is that all was not lost and the edges were thoroughly cooked and tasted ah-mazing (seriously, they were goddamn amazing).

I made them again and played around with the temperature (I didn't drop it down to 325 degrees like for the Bacon Chocolate Chip Brownies and the Cadbury Creme Egg Brownies). 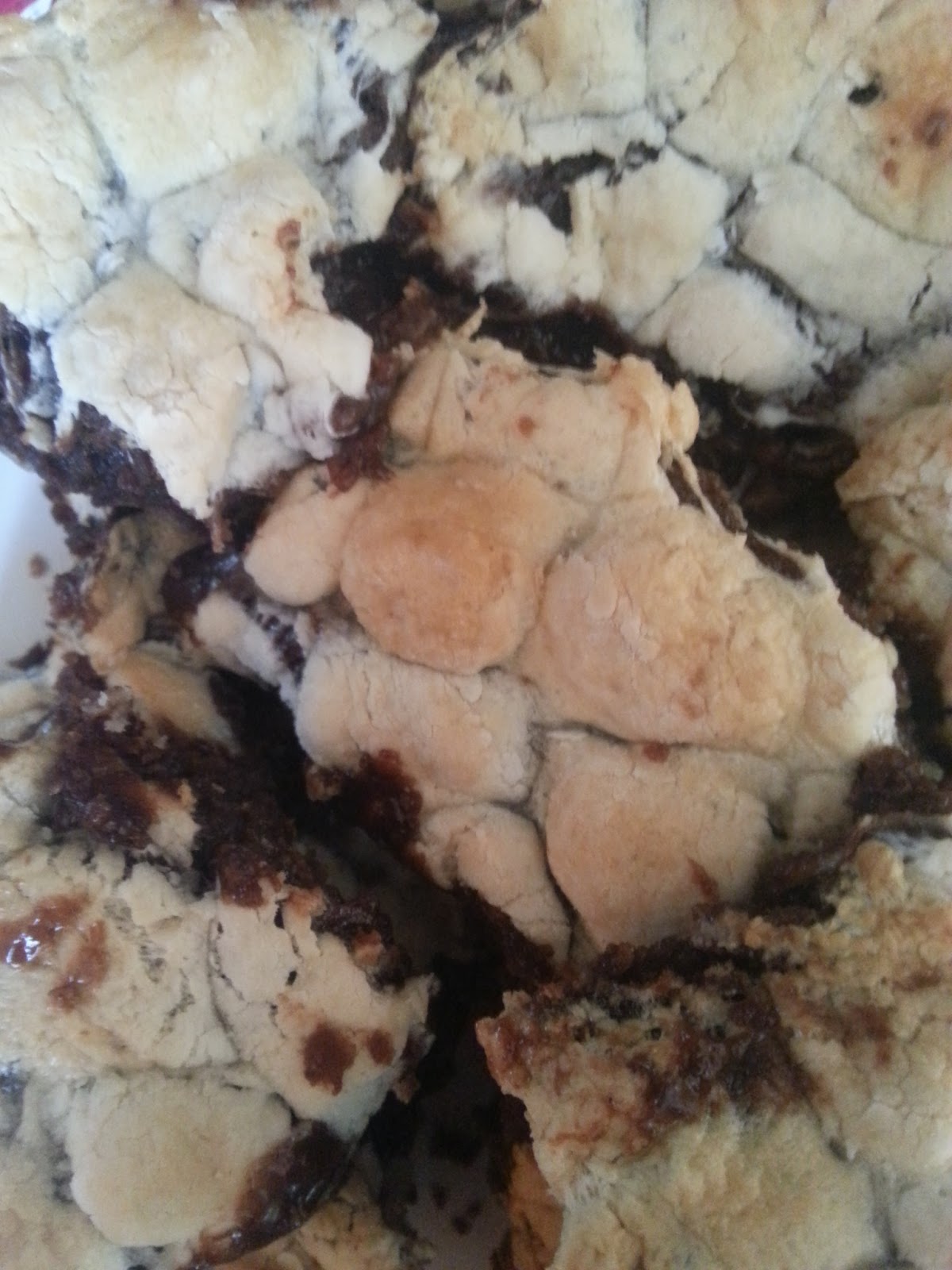 Break up the graham crackers and add to the mix. Spread in a greased and floured 9x13 inch pan (glass works best). Top with small marshmallows to preference (I like the brownies to be completely covered). 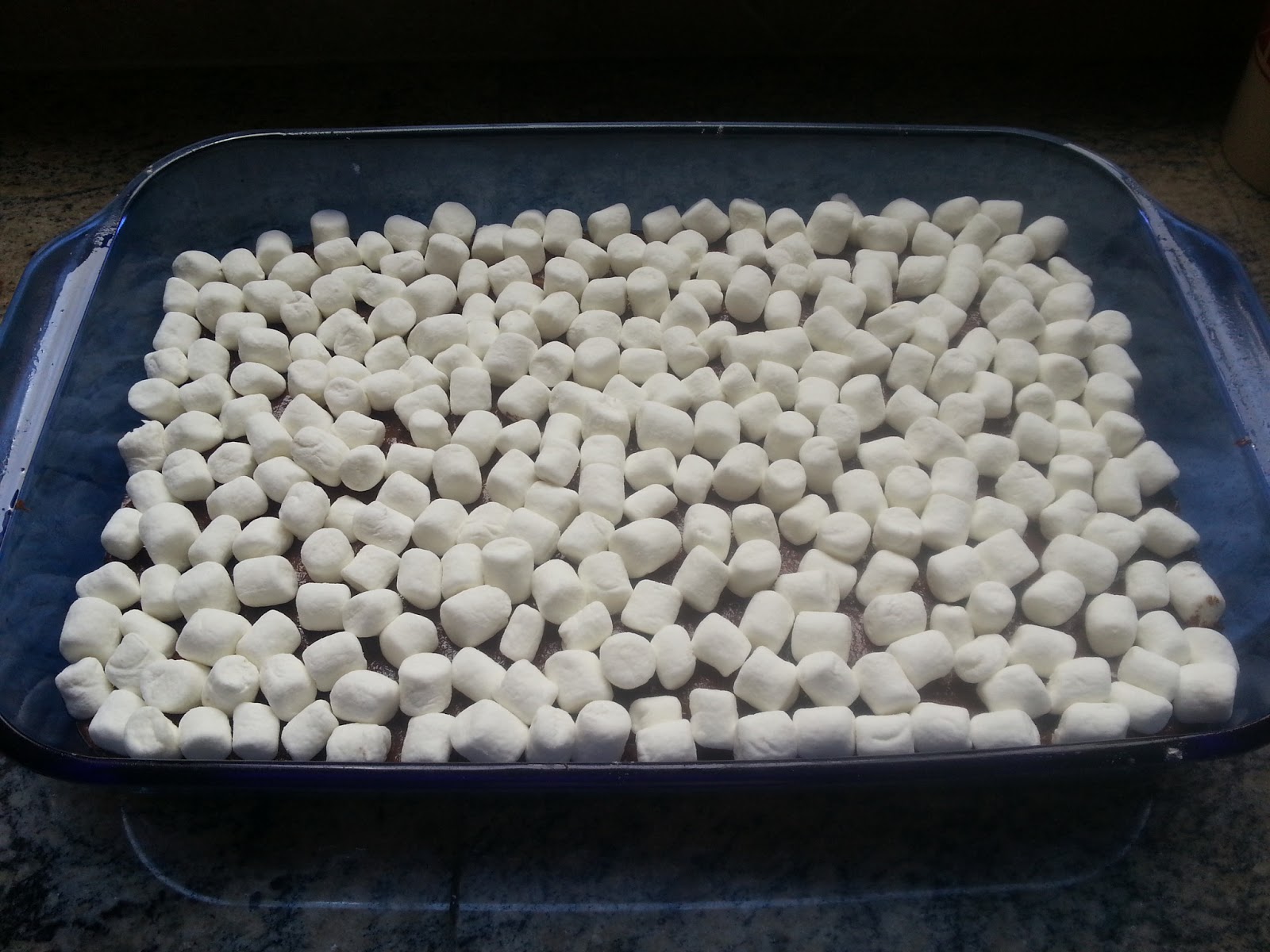 Bake for 40 minutes or until toothpick inserted in center comes out clean. If not cooked completely, return to oven in 5-10 minute increments until completely cooked. 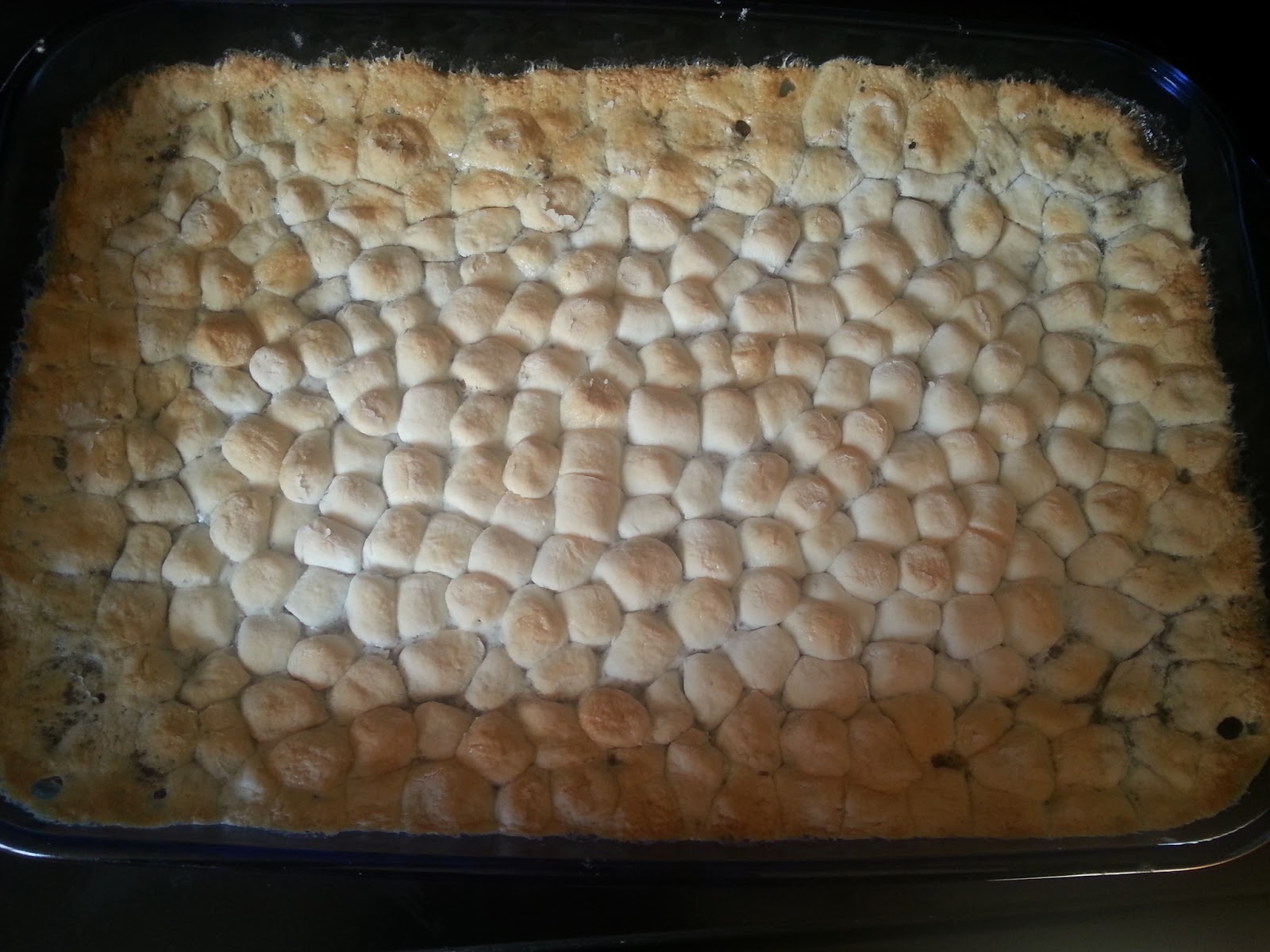 Posted by honey badger at 7:14 AM No comments: 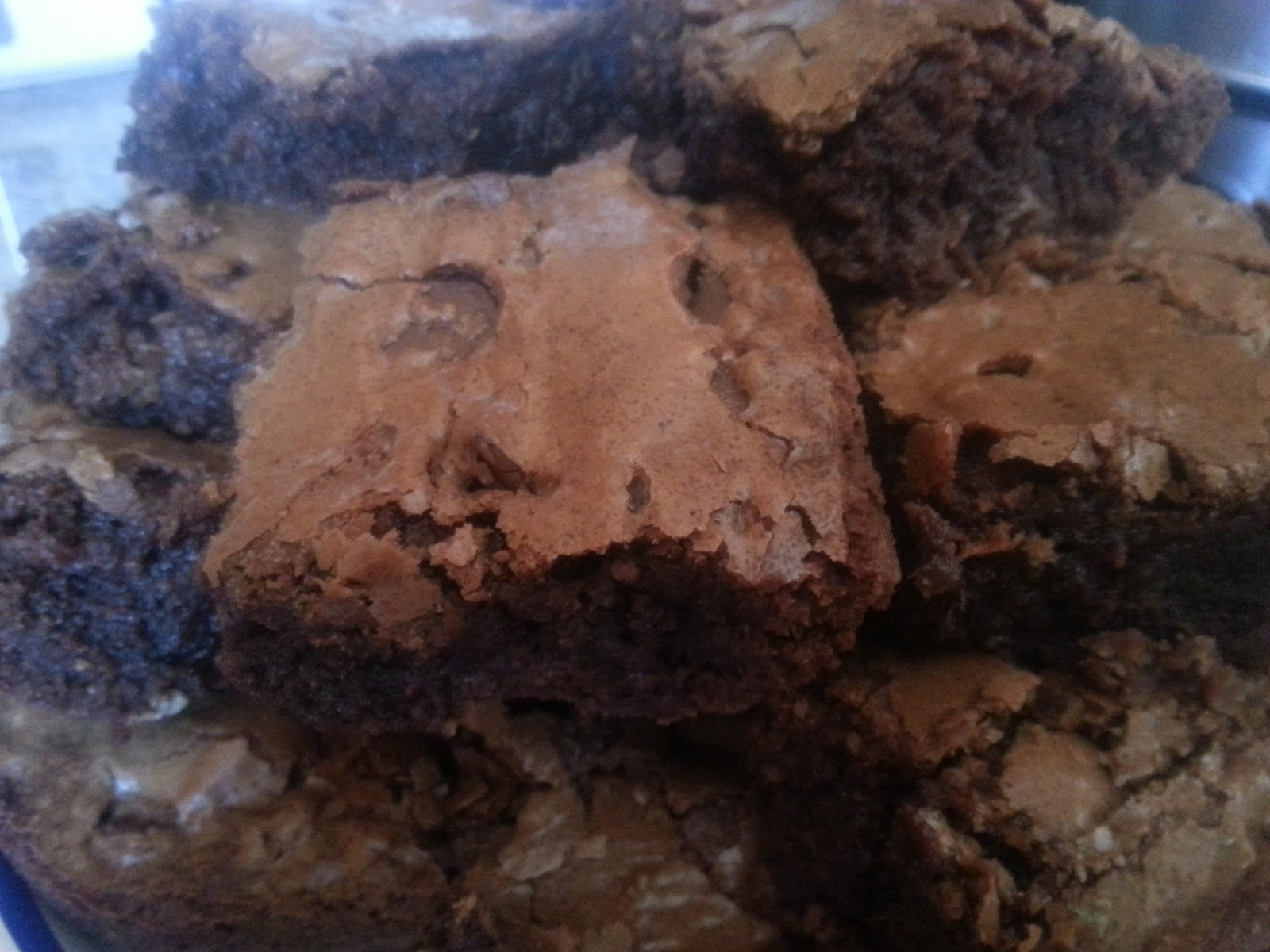 In celebration of World Baking Day I decided to make some Bacon Chocolate Chip Brownies. Actually, that's kind-of a lie. I was planning on making the brownies to bring to a BBQ before I realized there was even such a thing as World Baking Day, let alone that it was today. I decided to combine the brownie recipe from the Cadbury Creme Egg Brownies with the bacon and chocolate chip measurements I used in both the Maple Bacon Chocolate Chip Cookies and the Caramel Bacon White Chocolate Chip Cookies.
They turned out to be a great hit and I was even complimented on how moist they were and was asked what my secret was. Too bad I spaced and forgot to mention this blog. Oh well, maybe next time I'll be quicker on my feet and won't miss the opportunity to promote myself ;) 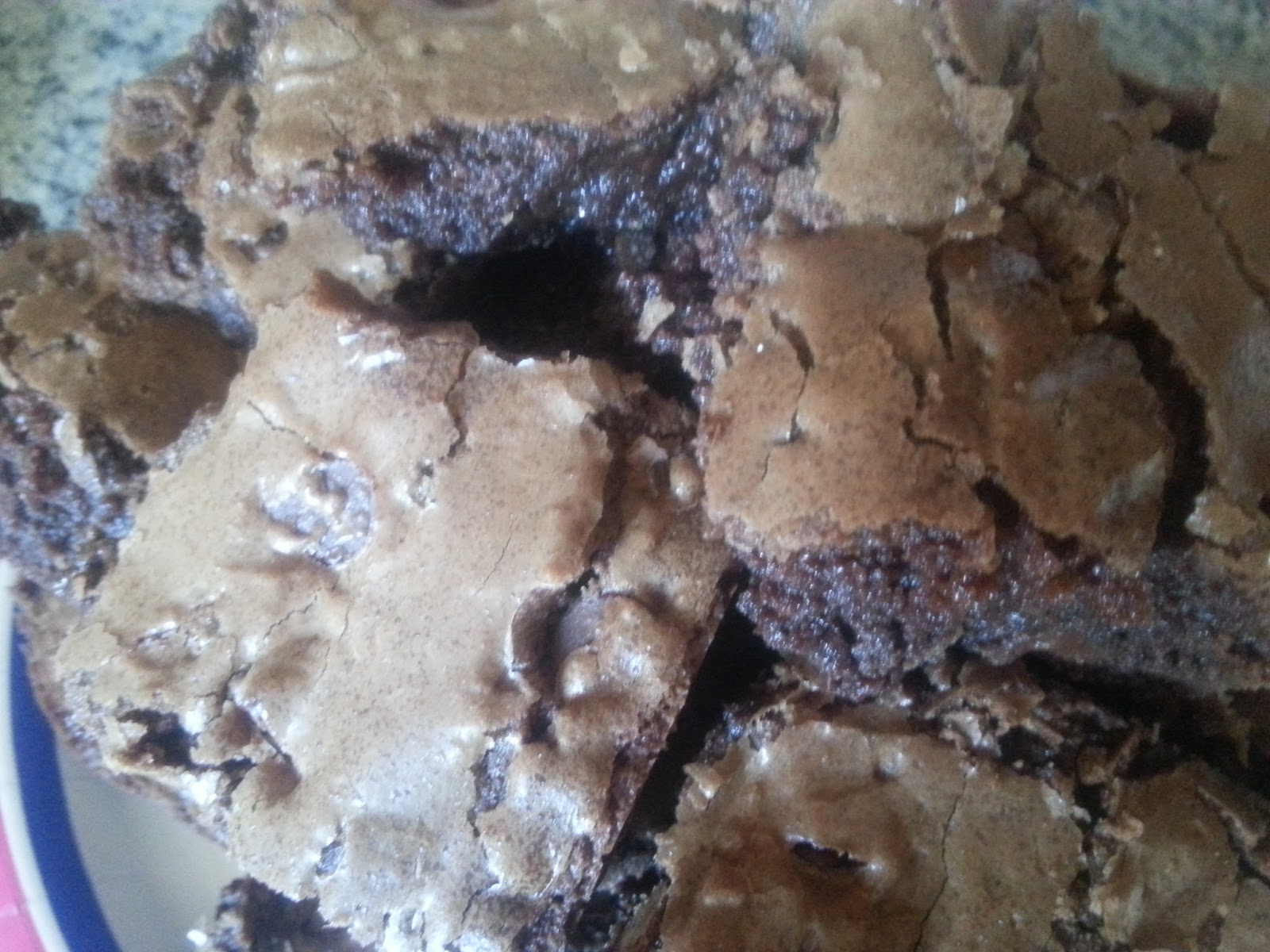 Melt chocolate with shortening in a large bowl in the microwave on high for 2 minutes. Stir until chocolate is completely melted. 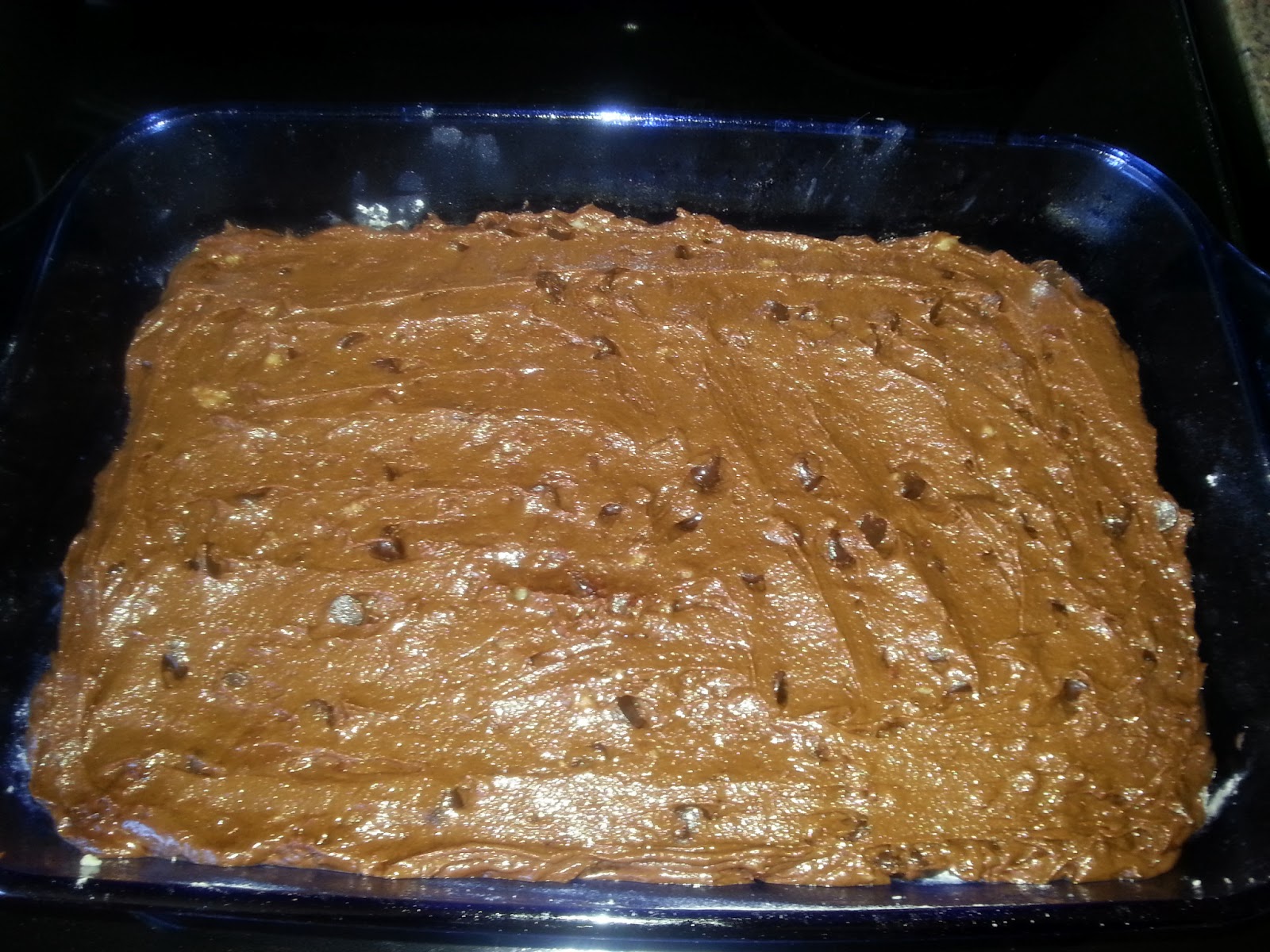 Stir in the chocolate chips and then the bacon into the mix. Spread in a greased and floured 9x13 inch pan (glass works best).

Reduce oven temperature to 325 degrees. Bake for 40 minutes or until toothpick inserted in center comes out clean. 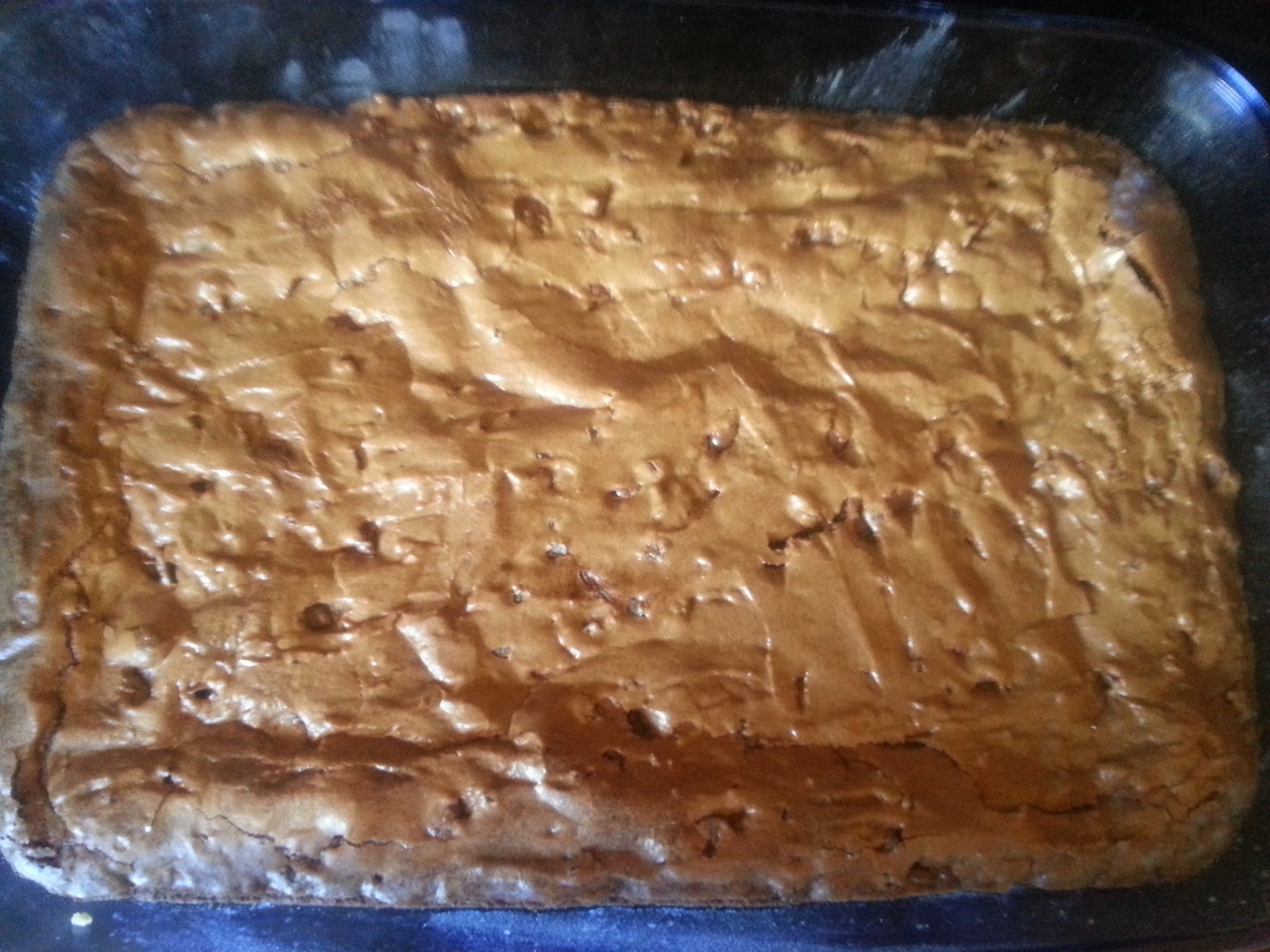 The Story of Us

So...this is actually not a post about mile high baking. Instead, I decided to post my "how we met" story of my husband and I. It was definitely a whirlwind courtship - we met at the end of March, started dating in the beginning of April, moved in together in September, got engaged in October and eloped in December...all in the same year. I joked with my family that we got married so quickly because I wanted my husband and I to be able to stay in the same room when we visited my parents for Christmas.

It may seem quick to the outsider - and I admit, if it hadn't happened to me I'd be skeptical - but we knew what we had was something special and unlike anything we had experienced before. And, although I hate to admit it, we aren't spring chickens anymore. Before meeting, each of us knew what we wanted and deserved and wouldn't settle for anything less. And we didn't.

who needed a change and decided to move to Colorado.


She had a friend

who had a cousin

who lived in Denver.

They messaged a few times and decided to meet up shortly after she arrived.

It took them no time at all to realize there was something more.

They shared many happy adventures together.

One day, the boy asked the girl to marry him and she said yes!

where they were married.

And then they lived happily ever after.

Posted by honey badger at 6:47 AM No comments:

Email ThisBlogThis!Share to TwitterShare to FacebookShare to Pinterest
Labels: 5280, eloped, happy, how we met, love, love story, marriage, special olympics, the story of us 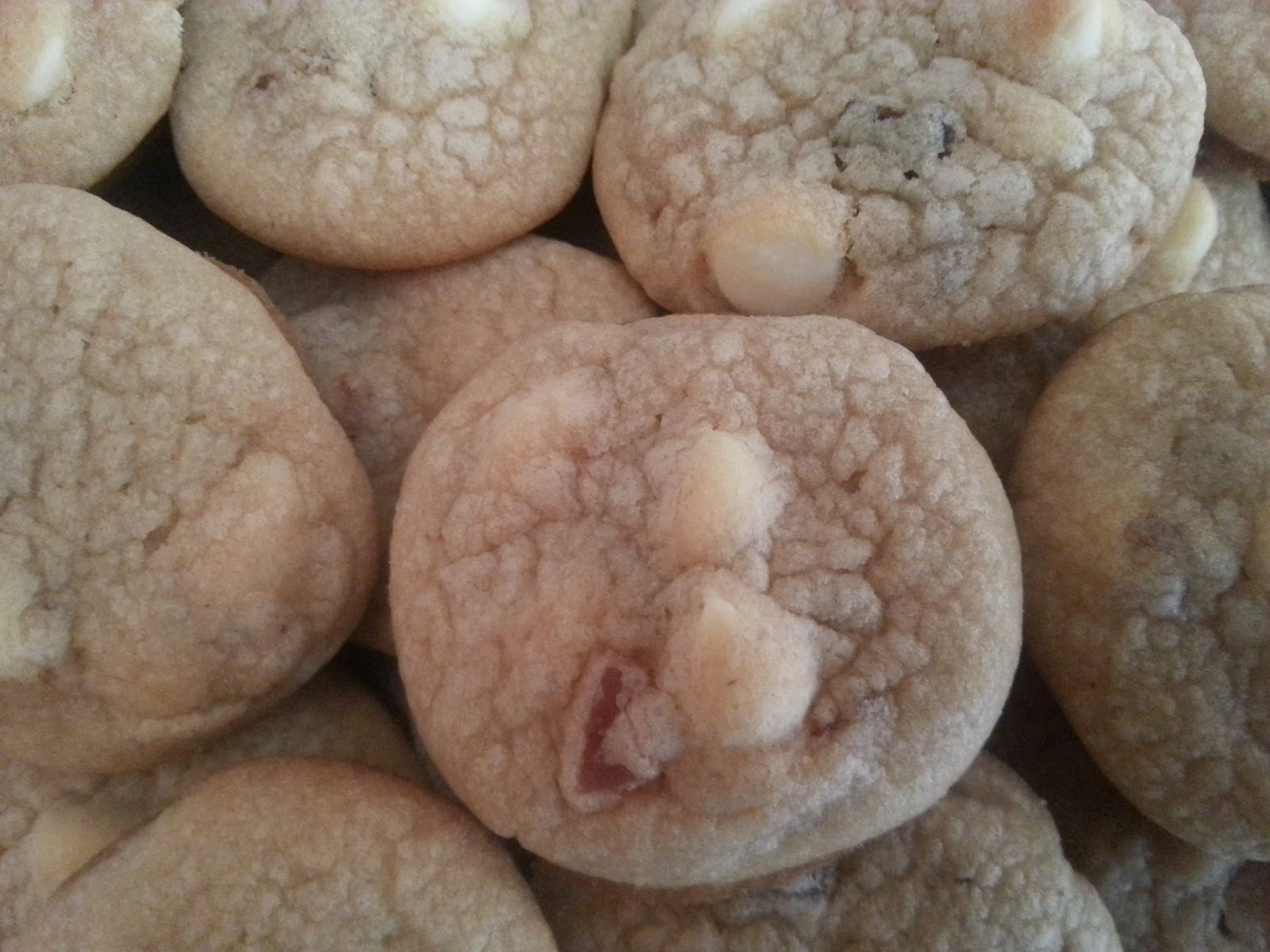 When I bake, there is always far more than can be consumed by my husband and me, so typically we take much of it to our offices. One of my husband's coworkers complained that I was the reason that he's fat, but that hasn't made me stop. Even so, we were out recently and I discovered that one coworker had never had any of my treats because he works a modified schedule. I promised him I would make something special and asked him what he would like. He responded with, "Caramel, white chocolate...*pause*...and bacon." So here I am again, baking with bacon (I'm thinking if this trend continues I may have to change the theme of my blog). 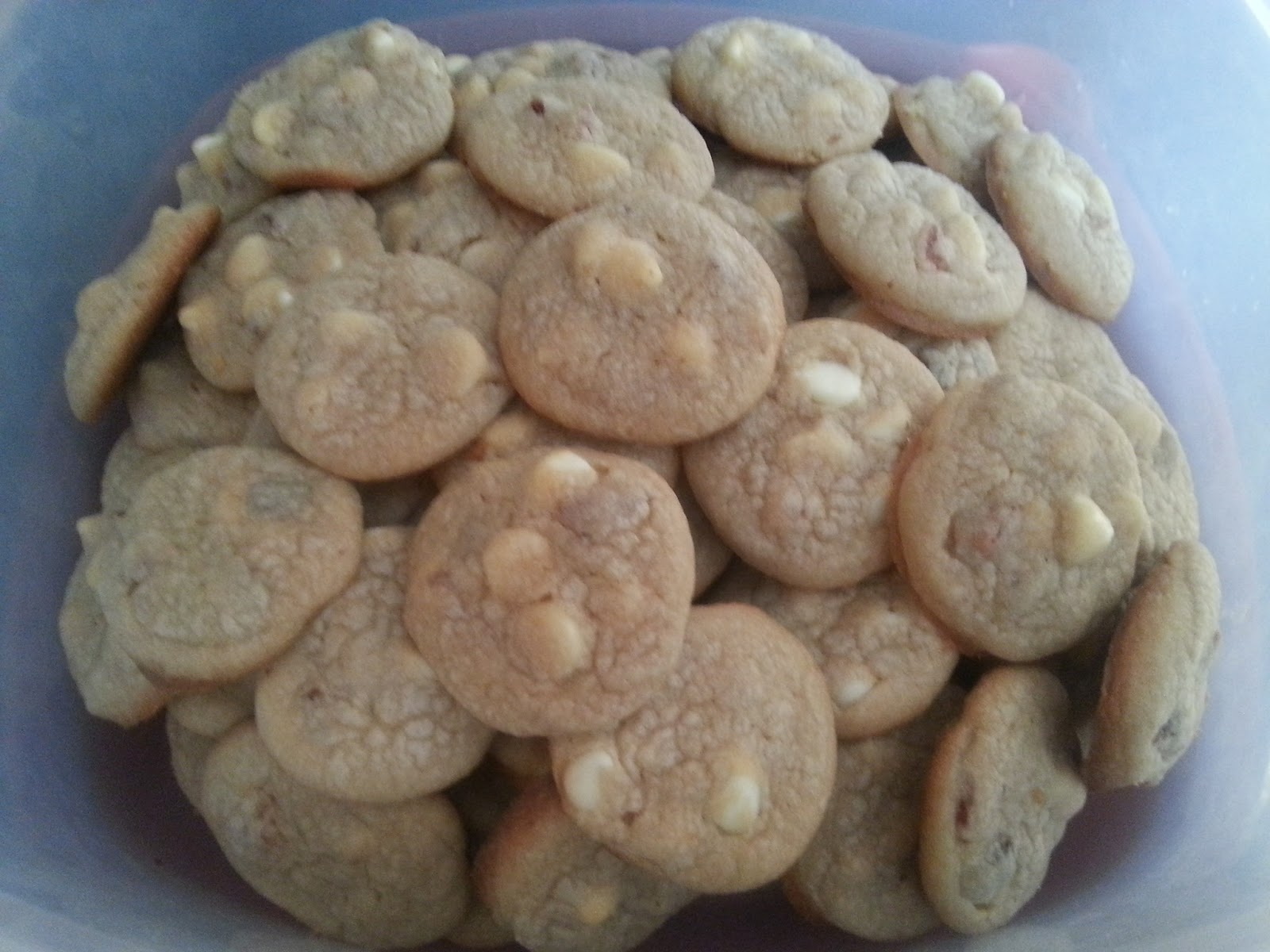 I racked my brain for sometime and came up with a few ideas, but ultimately decided that he'd asked for cookies, so cookies I would make. I ended up simply modifying the recipe I used for the Maple Bacon Chocolate Chip Cookies. I originally planned to substitute the maple extract with caramel extract, but I couldn't find it at any of my local grocery stores, so I instead used caramel syrup (I figured if the Maple Bacon Cupcakes used maple syrup, then the caramel syrup should be a fine substitute for these).

The verdict? You can really taste the bacon and there's a sweet aftertaste. I think since white chocolate has a more subtle flavor than other chocolates it really allows the bacon flavor to come through. 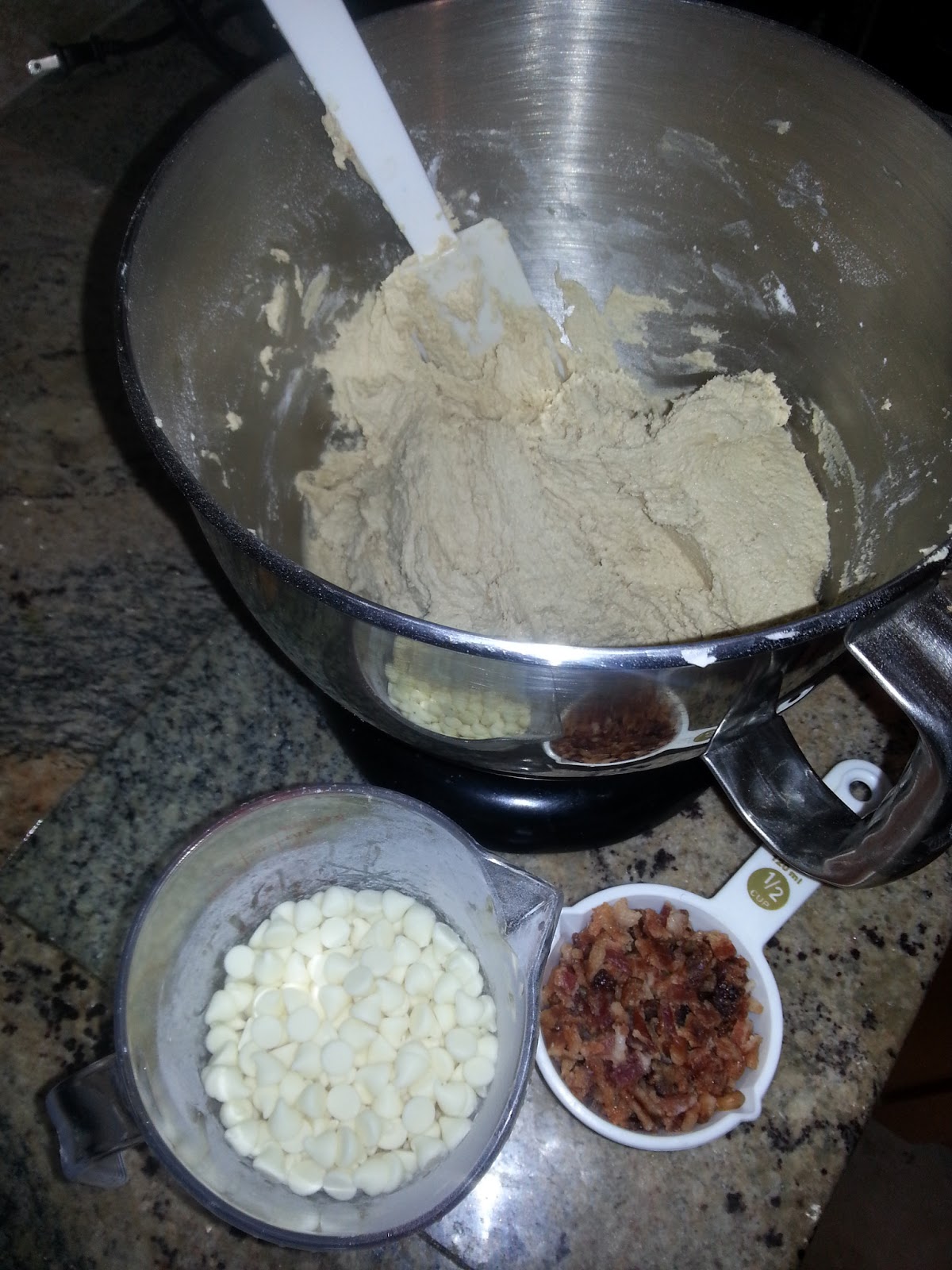 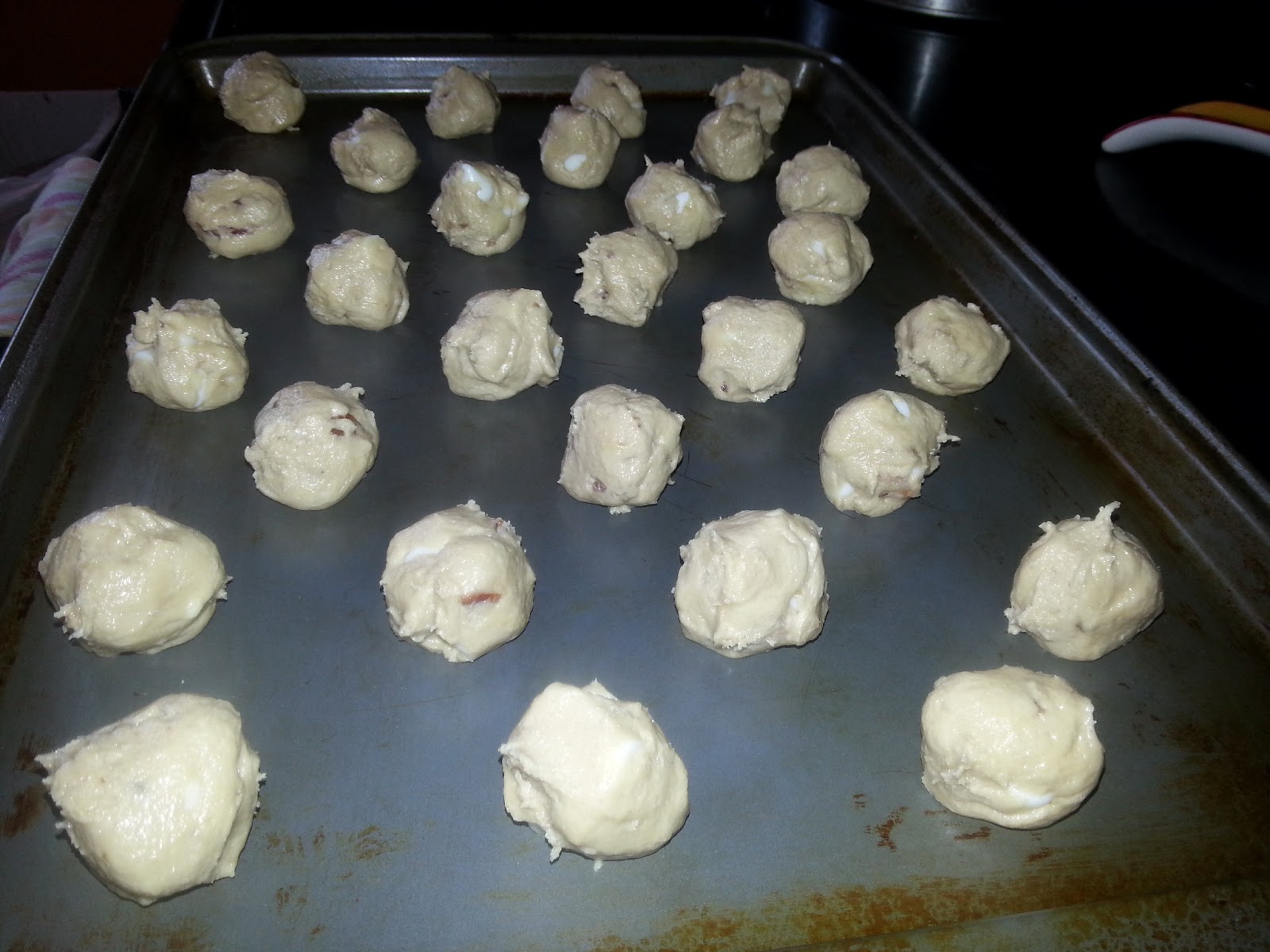 Preheat oven to 375. In a medium bowl, combine flour, salt and baking powder. In a large bowl, cream sugars and shortening. Add eggs, vanilla and caramel and beat until smooth. Add flour mixture slowly and thoroughly, a little at a time. Stir in white chocolate chips and bacon. Drop cookies, about an inch around, onto an ungreased cookie sheet about an inch apart. Bake for 10-12 minutes. Remove cookies from the cookie sheet immediately and place on a cooling rack or wax paper.

Posted by honey badger at 6:19 AM No comments: 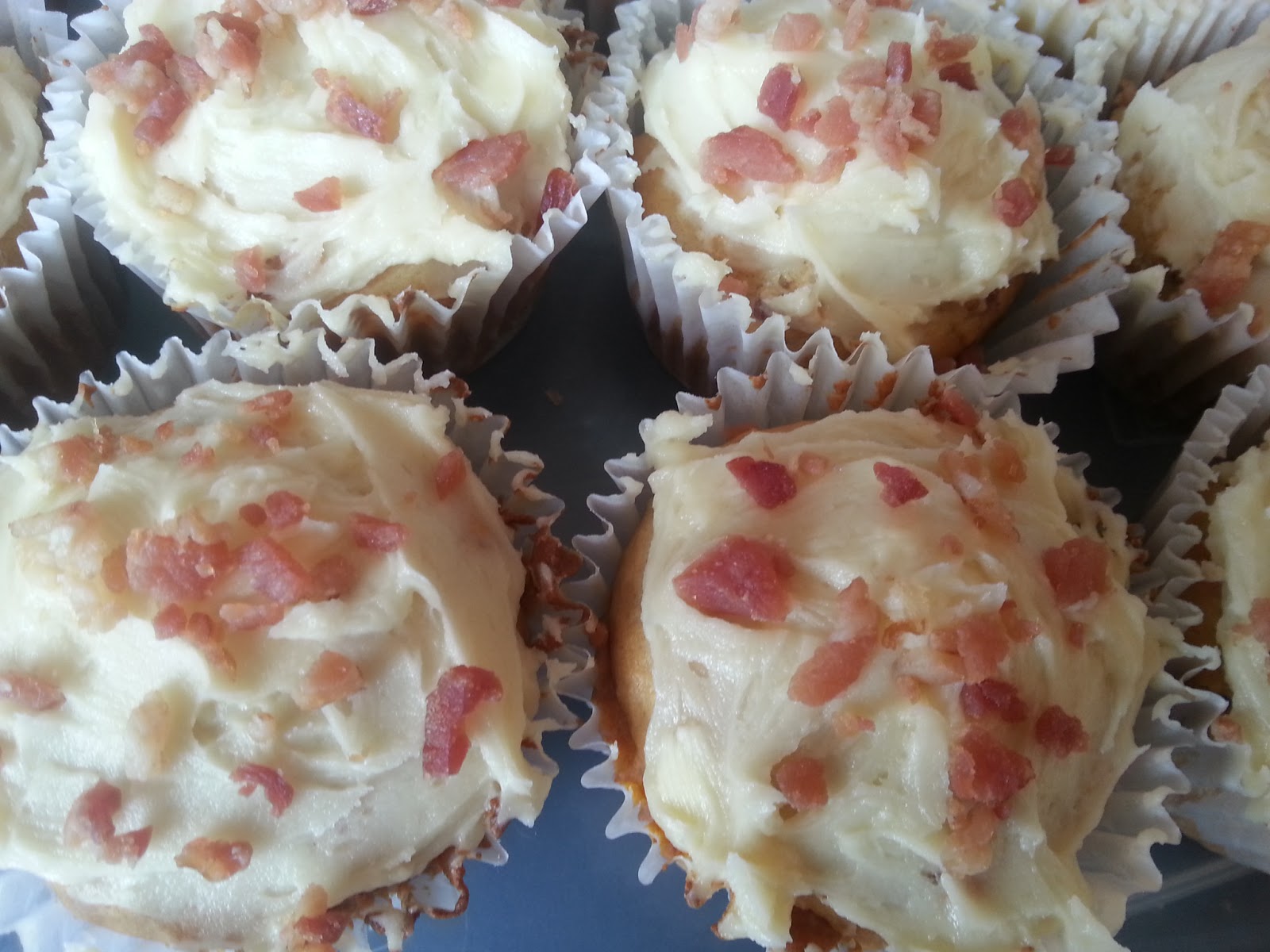 My husband's Birthday was last week. Per his request, I made Oatmeal Raisin Chocolate Chip Cookies. However, I had a lot of bacon left over from my Maple Bacon Chocolate Chip Cookies, so I decided to surprise him with Maple Bacon Cupcakes. Also, because candles don't stick well into cookies. Also, because I was working from home due to another snowstorm (apparently I moved to the tundra and not Denver as I had originally thought) and needed something to do on my lunch break.

I found a high altitude recipe (yay!) on the interwebs and decided to give it a go. The recipe calls for the use of bacon grease, which is great if you are cooking the bacon immediately before you make the cupcakes, which I wasn't. Lucky for me, my husband has been saving bacon grease in a jar in the freezer (it's because it can't go down the drain in the sink, but I'm not sure what we're saving it for exactly...but in this case it worked out so I'm not complaining). I modified the recipe slightly based on my own tastes and because some of the measurements were a little confusing.

I love cupcakes, but I don't make them all that often, so I don't have any of the fancy tools for icing, so my cupcakes don't look all that impressive, but boy do they taste awesome! My husband, who normally doesn't like icing, really loved the Maple Buttercream. 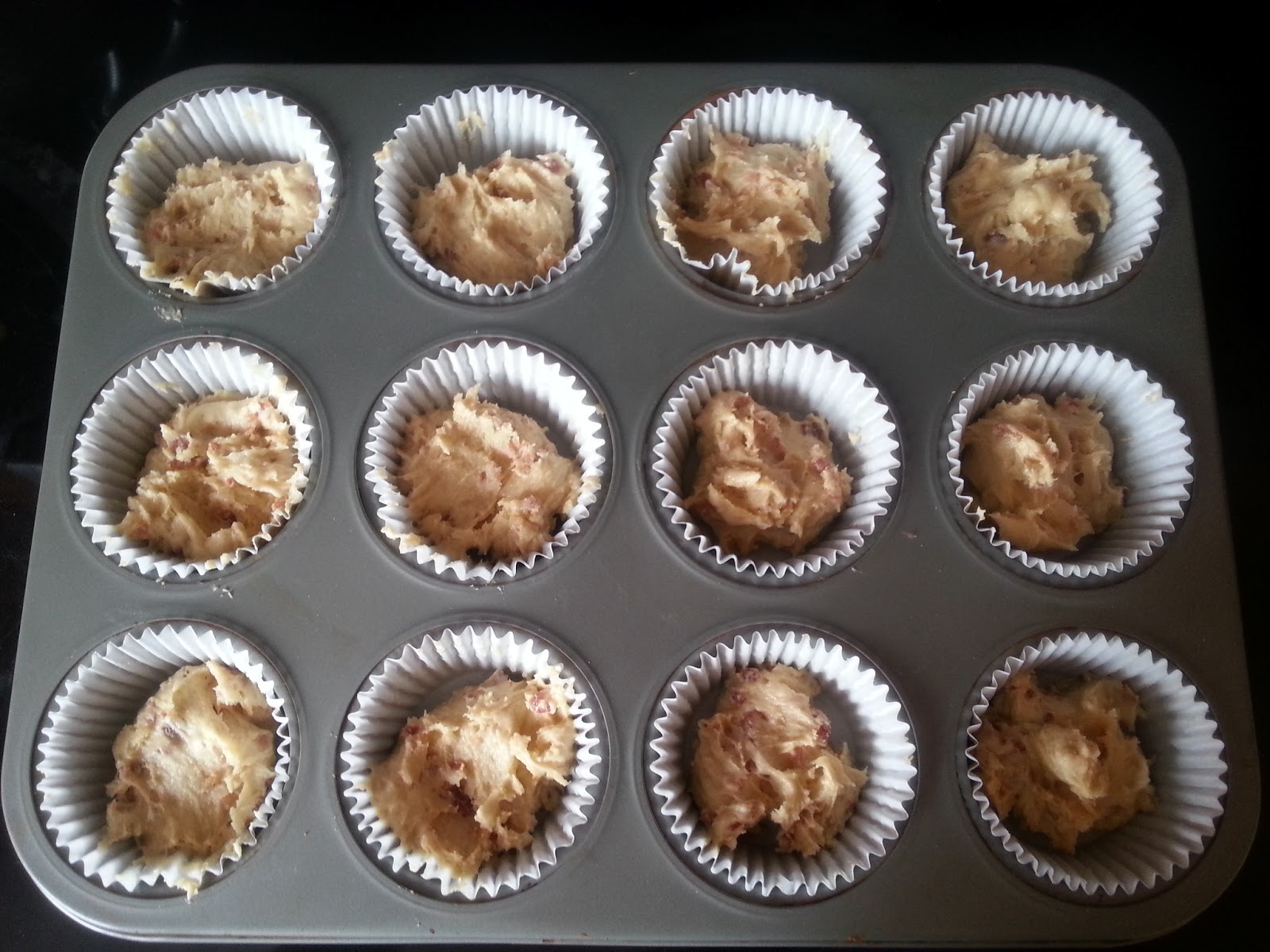 Cook the bacon however you like (again, sorry, my husband is still not spilling the super secret awesome bacon recipe). You will need about 6 pieces. Save the bacon grease!

Once the bacon grease solidifies, beat it with the butter until creamed. Beat in brown sugar and maple syrup. Add egg and beat until well combined.

Slowly add dry ingredients into wet ingredients. Beat in milk until smooth. Stir in the bacon.

Add the mix into the muffin pans, using cupcake liners.

Bake for 12-15 minutes and let cool before adding icing. 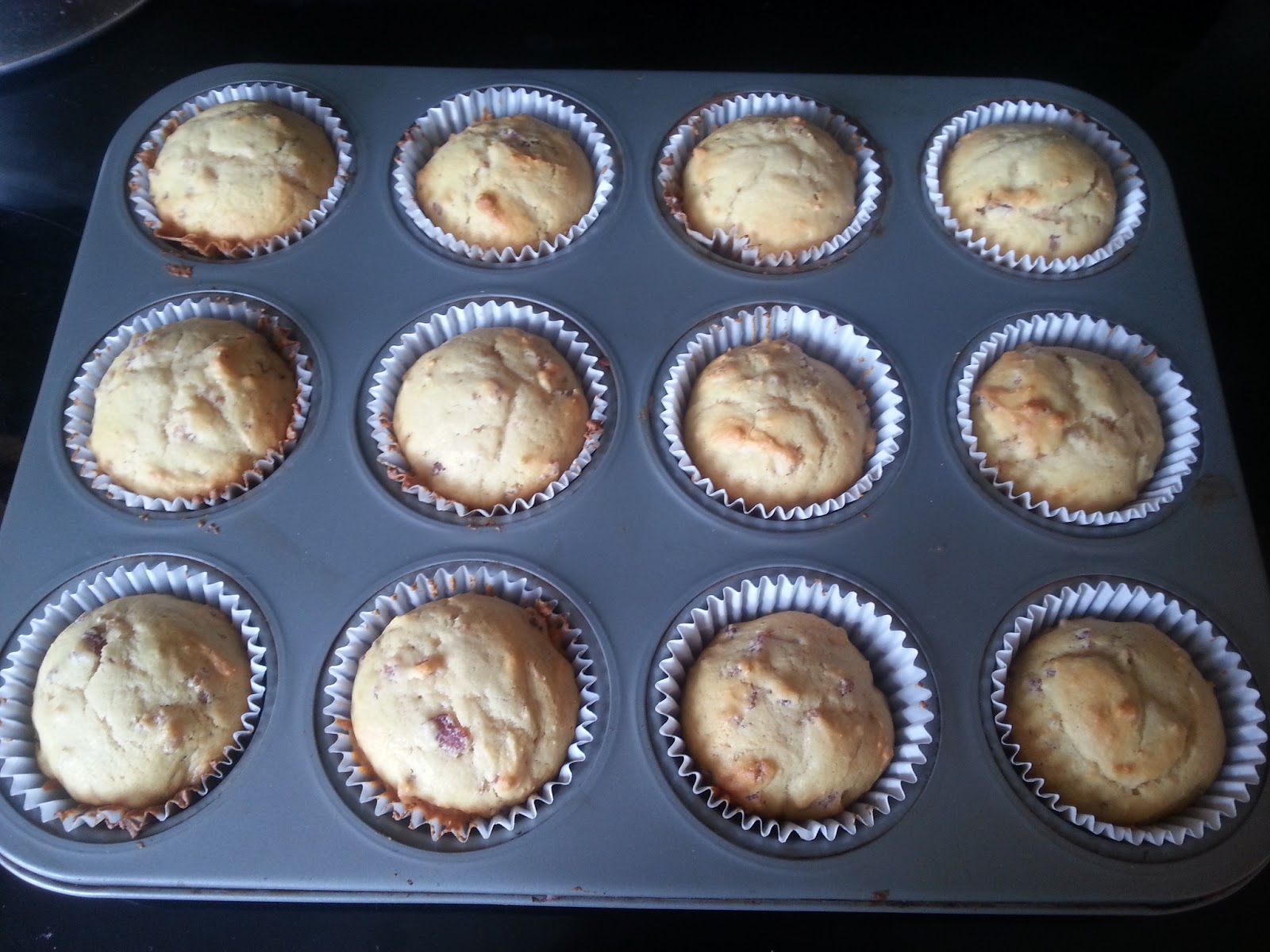 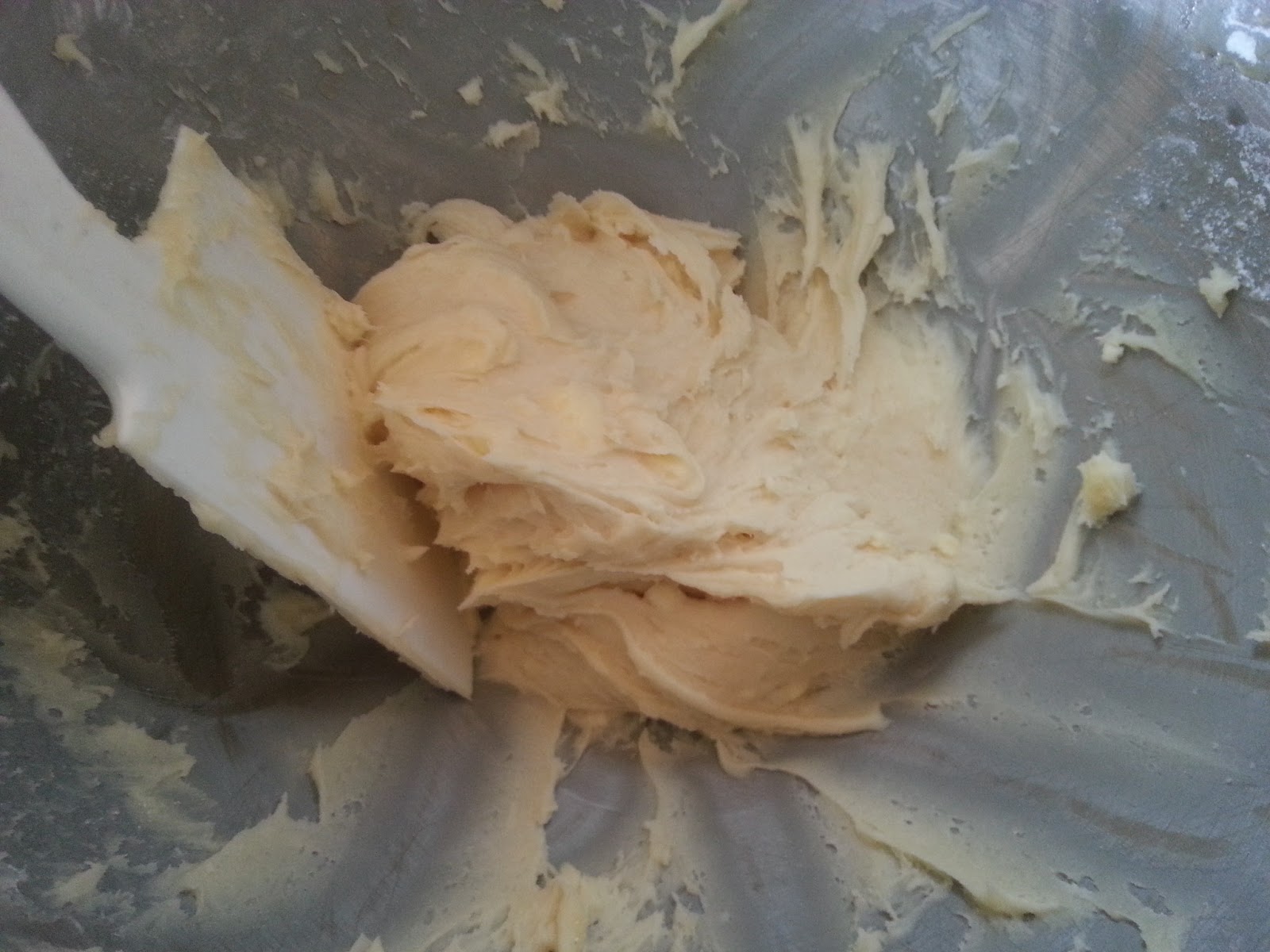 Icing Directions:
Beat ingredients on high until well combined. Add to cupcakes and then sprinkle on the remaining bacon bits.

Posted by honey badger at 10:54 AM No comments: